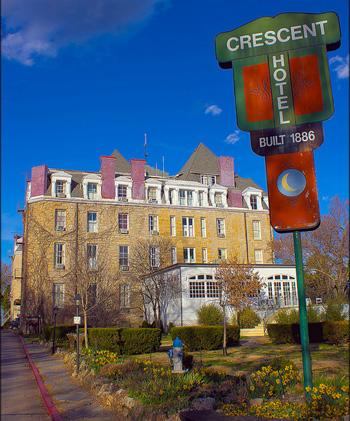 The haunted hotel is one of the most written about, prevalent pieces in fiction and horror. Maybe it’s because hotels have so many people who come and go. Many of them seem to take on an air of the people that have been through it, some of them good, some of them bad. But when someone dies in a hotel room, the feeling gets even worse.

What if one of them stayed behind to haunt the room?  An estimated two to eight deaths happen in hotels every single day which raises the statistics of a haunting even higher. Here are the top 5 haunted hotels for you to check out (or avoid) on your travels.

Crescent Hotel – The Crescent Hotel located in Eureka Springs, Arkansas has called itself America’s most haunted hotel. In its 120 year history, the hotel has served as a cancer hospital, a community college and a hotel.

There are numerous hauntings that are frequently reported at the Crescent. For starters, a woman frequently roams the hallways. A mischievous boy haunts the dining room and misplaces silverware. Room 218 is haunted by the ghost of a stonecutter who fell to his death during the construction of the hotel.

Castle Leslie – Perhaps one of the oldest haunted hotels around, Castle Leslie is a medieval castle in Glasglough turned into a medieval style hotel. It is designed to allow guests to get away from technology and to learn to live like their ancestors. Deceased members of the Leslie clan are frequently seen haunting the castle. The most famous is Norman Leslie who can be seen the most frequently.

Langham Hotel – In London lies yet another haunted hotel. The Langham Hotel was opened in 1865 as London’s then largest building. The ceremony was even presided over by King Edward VII. The hotel was bombed during the British bombing and many of the guests died. It was re-furbished to its former grandeur, however; the ghosts of the dead still roam its halls. Ghosts that have been seen include soldiers, women and Napoleon III who was at one point, locked in the basement.

Hotel De Coronado – The Hotel De Coronado is one of the largest beach resort hotels in North America. The hotel rests in San-Diego California and has been a nightly home for presidents, movie stars and even royalty. The Coronado has also appeared in numerous movies. However; that isn’t the Coronado’s claim to fame.

The ghost of Kate Morgan haunts room 302. In 1892 she checked in to reconcile with her husband who never arrived. Six days later her body was found with a bullet hole in her forehead. While the death was ruled a suicide, the circumstances shall never be known and Kate’s ghost still haunts the Coronado…

The fabulous Marilyn Monroe is often seen a mirrors in the hotel and many people claim to hear Montgomery Clift (from Here to Eternity) playing his Bugle on windy evenings. Marilyn Monroe haunts a mirror that now rests in the Marilyn Monroe suite and you can make reservations for the room.

Matthew loves travel and writes for Directline Holidays, a leading package holiday company that caters to the UK market.