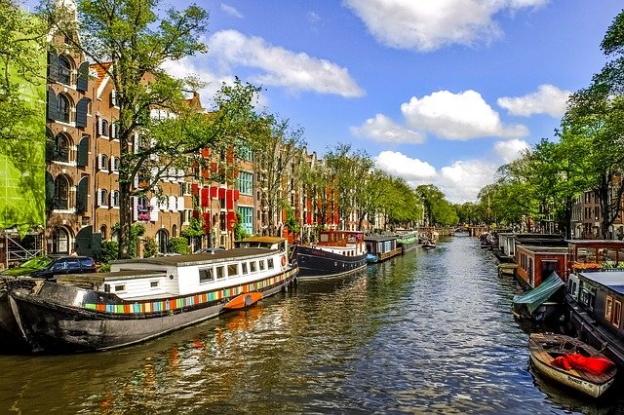 They say that “There’s only one thing more precious than our time, and that’s who we spend it on.” It is fascinating to think that a year ago we spend a memorable week strolling happily around Amsterdam, taking photographs and scribbling on my notebook, my very own Amsterdam Travel Blog.

This year due to Covid-19, life for a lot of people has been very harsh, travel plans had to be cancelled. Life takes a very different perspective. The way that we all do simple things this year and have to follow the new Social Distancing rules.

Allow me to take a step back from this reality and present you with my very own Amsterdam Travel Blog.

My notebook is off the shelf and as I am turning the pages, I am overflown with memories, laughs, and cheers, everything is coming back.

Arriving at Schiphol Airport in Amsterdam

We arrived at Amsterdam Schiphol Airport on a cold but sunny Tuesday morning. For those of you who are not familiar with Amsterdam, Schiphol is the main international airport in the Netherlands, located approximately nine miles from the center of Amsterdam.

Schiphol airport is actually considered to be an airport city and is the primary hub for the Royal Dutch Airlines, KLM, Transavia, Amsterdam Airlines.

So, plenty of choices when you are looking for flights to Amsterdam.

After we cleared passport control and got our luggage, we headed to the Schiphol train station, which is located directly below the airport.

The train took us to the center of Amsterdam (Amsterdam Central Station) within less than 20 minutes. Trains from Schiphol to Amsterdam city center leave from platforms 1 or 2. A single train ticket cost us €5,00 each.

Amsterdam, rightly called, “The Venice of the North” is a famous tourist destination built around various canals. Perhaps, this is the reason that more than staying in a hotel, most visitors arriving here, prefer to stay in houseboats. We did the same.

Our first two nights were at Radisson Blu hotel, and then five nights at the Trijntje houseboat. Most houseboats available in Amsterdam have been specifically designed to provide their guests with a really unique experience, cozy and very inviting atmosphere.

The best thing is that staying in houseboats in Amsterdam, is well within the reach of the average tourist. If I remember well, we paid 150, Euros a night, which is reasonable as hotels in Amsterdam are not cheap.

I also promise you; you will not find a better city center location than this one. It is very quiet at this part of the Prinsengracht. Most museums, retail shops, restaurants, cafés and clubs that make Amsterdam unforgettable are within walking distance.

The Trijntje houseboat was our luxurious home away from home for five nights in Amsterdam.

Getting around in Amsterdam

Getting around this Dutch city is always a pleasure on a bike without getting confused between streets and city traffic. So, we rented two bikes, and we set off to explore the city.

Cultural Walks and Tours in Amsterdam

Museums, Canals, Cruises, Historical Buildings; all this and much more was awaiting us on our arrival in Amsterdam. Considered as one of the smallest capitals in Europe, Amsterdam is a hub of charming tourist attractions.

Below are some of the historical places that we visited during our holiday in Amsterdam.

Our first visit was to the Anne Frank House, the place where Anne Frank hid and wrote her famous diary during world war II. This is a historical attraction of Amsterdam that will remind you of the second World War, when there was destruction all over.

Koninklijk Paleis or the Royal Palace on the Dam, was very high on our list, and we were not disappointed, a must-visit place during a trip to Amsterdam.

This former Queen’s residence was designed by Jacob van Campen. Watch out for the classical and magnificent interior and discover the rich history of the Royal Palace, that is set almost at the central point of Amsterdam.

When discussing the top places to visit in Amsterdam, one can not forget mentioning the famous Rijksmuseum. Also known as, The Dutch National Museum, this tourist attraction is a famous arts museum that was set up by King Louis Napoleon in 1809.

Also known as, the Municipal Museum, Stedelijk Museum is one of the most modern arts museums of Europe. It was founded in 1885 and houses the famous Dutch and French paintings of 19th and 20th century.

The walk inside the sculpture garden of this museum was really a pleasure, and we saw the works of great artists like Renoir, Moor, Rodin, Visser and Laurens.

We really enjoyed watching the most extensive Van Gogh collection in the world at the Van Gogh Museum of Amsterdam. The museum houses a huge collection of 200 paintings, 500 drawings and 700 letters, all of which are worth seeing.

We got to learn about Van Gogh’s works in the Museum’s Library. Apart from the library, there is a workshop and three different floors in the Van Gogh Museum.

Eating Out in Amsterdam

We were pleasantly surprised with the numerous choices of international cuisines on offer. Amsterdam has all the reasons to be called a foodie’s paradise.

You can really spoil yourself with all sorts of sweets, cakes, and desserts. A huge variety of delicious dishes from around the world are available at every street.

No wonder why, two full pages of notes have been scribbled in my Amsterdam Travel blog, on snacks, launches, and diners around the city.

Amsterdam has a lot in store to tickle your taste buds including some really delicious traditional Dutch delicacies. From the popular delicacies to the popular restaurants, we visited and tasted there are quite a few that definitely worth mentioning bellow, so if you are in Amsterdam you will not have a problem satisfy your culinary cravings.

For those of you who have a sweet tooth, Stroopwafels form a sinful temptation. This rich Dutch cookie is a must try if you really want to taste the true culinary delights of Amsterdam.

Also known as, syrup waffle, Stroopwafel is made up of a thin sandwich of two buttery waffle layers with sweet molasses in between. Watching this amazing waffle being made in front of your eyes is a pleasure in itself.

Poffertjes Pannekoeken or the Dutch pancakes taste almost like the French crêpes. Made up of buttery batter, these traditional delicacies are served in a plate-sized serving dipped with Dutch syrup.

Dining will be an experience of its kind if you relish the Pannekoeken with Poffertjes, also known as puffed pancakes. You can easily get these dishes at the bakeries like the Pancake Bakery in Amsterdam.

Those of you who love cheese (I do) must try the famous Dutch cheese in Amsterdam. Gouda and Edam are the two very popular cheeses available in this city.

Also, try the goat cheese and different variations of handcrafted farmer’s cheese at places like the Amsterdam market stand. Taste the Dutch cheese yourself and also buy it to gift it to your loved ones back home.

Puccini was our favour chocolate shop, and we got plenty of Verkade and Droste chocolates to bring back home.

Situated near Belgium the talented beer brewer, Amsterdam is famous for its Dutch Beer. Beer lovers won’t be able to resist sipping some of the finest Dutch beers while indulging in a dining experience at Amsterdam.

You can also enjoy going on the special beer tours and visit the famous breweries of Amsterdam. We stopped at Oedipus Brewing, north of the River IJ.

We also planned to dig into the gourmet cuisine of Amsterdam so we visited some of the most popular restaurants of the city.

We headed towards Rose’s Cantina, known to serve the New Mexican dishes in Amsterdam. All kinds of exotic beverages are served at the famous bars like Ship Chandler’s Warehouse, Moeders Restaurant and Le Hollandais.

Nomads is another exotic bar in Amsterdam serving all types of beverages. So, now you won’t have to worry where to eat and what to eat as you can simply try the above-mentioned delicacies and popular restaurants of Amsterdam to satisfy your taste for the local cuisine.

I can talk and write about Amsterdam and the unforgettable holiday that we had for a very long time, but I feel that my Amsterdam travel blog is incomplete, there are things that we didn’t have time to see and do in Amsterdam.

So, first thing on my bucket list as soon as the current pandemic is behind us (and believe me it will end soon) to head back to “The Venice of the North.” My Amsterdam travel blog will get another chapter soon, so stay tune for an update at Hotels-Fairy.com.

Nectarios, is a senior editor at Hotels-Fairy.com. He is also ardent traveler, a digital nomad. When he doesn’t travel, he manages a small hotel on the beautiful island of Crete.