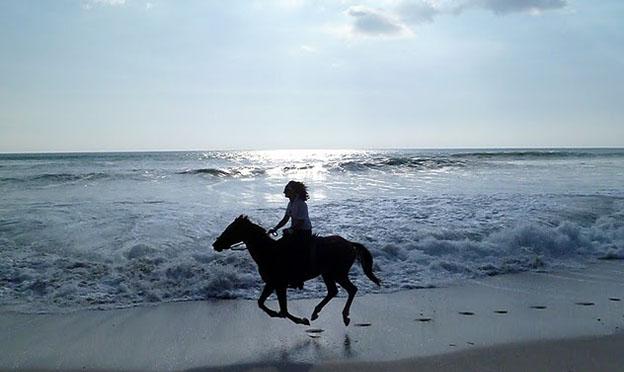 Santa Teresa is a sleepy little beach town on the western central coast of Costa Rica just north of the popular surfing destination of Mal Pais. Although it was once only a tiny fishing village it has become a popular tourist destination in the past two decades, especially among surfers, nature lovers and backpackers who love its unspoiled charms.

Santa Teresa has an approximate population of a little more than 10,000 people, which includes a substantial number of expats from the U.S. and the rest of the world. Many foreigners came to visit and ended up staying after being captivated by the slow pace and natural beauty of the place.

The local “flavor” is definitely open and international, with restaurants serving various cuisines and people of all races mingling easily in the bars, cafes and stores with ease.

Santa Teresa has a more bohemian rather than upscale feel. Even though there is a lot of tourism it is, at least for the moment, more surf- and eco-tourism. There are good-sized hotels and lots of places to stay and things to do, but Santa Teresa lacks the more commercial feel of Jaco or Tamarindo, which are also both big tourist destinations, on the Western coast.

Hotels and vacation rentals are there aplenty, with more than 30 places to choose from. Whether your taste is upscale or casual, it’s in Santa Teresa. The hotels, hostels, homes and cabanas can go from $10 per night up to more than $1,000 per night, so there is definitely something for everyone.

The biggest attraction is, of course, the beach. Playa (Beach) Santa Teresa is one of the prettiest in Costa Rica. It was actually named as the number one beach in Latin America by Tripadvisor.com. This beach consistently earns Costa Rica’s “Bandera Azul” (“Blue Flag”) award every year for its cleanliness.

Playa Santa Teresa is the site of one of the best surf breaks on the Western coast, called “Suck Rock” by surfers; the great waves are caused by the numerous sand bars off the coast. Along with neighboring Playa Carmen, Santa Teresa beach is one of the best to catch waves on in Costa Rica, with surf stars playing in the water during the day and enjoying the local atmosphere at night.

There are several surf shops and surfing clinics in Santa Teresa as well as in surrounding areas.

There is plenty to do in Santa Teresa besides surf, though. There are art galleries, organic food markets, an arts and crafts market, electronica music parties, lots of live music—plus all the “normal” things like banks, supermarkets, a health clinic and a drugstore. Gas stations and hospitals are nearby in Cobano, which is a larger town less than 3 kilometers away.

Tourists can rent bikes, ATVs and even horses to explore the area, especially the beautiful Cabo Blanco Nature Reserve nearby, where you can see native wildlife and plants in their natural states. Water sports like scuba diving and snorkeling are popular too, though divers usually have to go further out past the breaks to have a better view in the water due to the waves.

Deep-sea fishermen can angle for marlin and other billfish. The more adventurous can try canopy tours and rock climbing.

You’ll never lack for something good to eat or something fun to do while in Santa Teresa, even if it’s just lounging on the beach at sunset enjoying the cool, salty sea breezes. You’ll quickly see why people from all over the globe decided to make Santa Teresa their home, and why many more are quickly discovering this sweet little beach town where “Pura Vida” is more than just a greeting: it’s a way of life.

The post is written by Aishwarya Vohra. Aishwarya being an adventure freak she spends all her time off exploring new places.