Montreal has warm summers where the general climate is quite humid. Average temperatures are between 250C (highs) and 150C (lows). This is also the best time to be in Montreal for those who don’t like snow. While it rains, at least a few days a month, for almost 8 months in Montreal, snow takes over for the remaining four.

Temperatures go down to -150C, on an average although on some days, the temperature stays above freezing to bring down rain & hail instead of snow.

A massive French influence has meant that Montreal has a wide range of art, music, dance and food that add value to its character. Events like the Just for Laughs comedy festival are paired up with the Montreal International Jazz Festival.

The Montreal World Film Festival is one of the most important festivals in the world, while the Montreal Fireworks Festival is just a chance for millions to gather and watch the wonderful display in the night sky.

The Place des Arts is a wonderful location that consists of a number of theatres and galleries spread out in a particular square that takes over the eastern end of downtown Montreal.

The Montreal Symphony Orchestra, the Orchestre Metropolitain du Grand Montreal and Les Grands Ballets Canadiens are some of the world-class performing arts groups that call Montreal and the Places des Arts their home.

Sport is also a massive part of the city that not only has its own Ice Hockey franchise, a football team and is also home to the FIA Formula One World Championships’ Canadian Grand Prix.

A walk through this wonderful city reveals the massive influence of Victorian and medieval French architecture on the cityscape. There are a number of beautiful buildings like the Montreal City Hall, the McGill University and the Universite de Montreal. 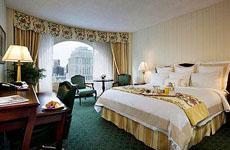 At the Marriott Hotel in Chateau Champlain, Montreal’s magic seems enhanced. Right in the middle of the city’s retail district, the hotel provides easy access to the city’s fantastic nightlife as well as to some extremely interesting sights in Old Montreal.

There are over 610 award-winning rooms at the Marriott Hotel, each with panoramic views of this lovely city. There are pay-per-view movies to add to the hotel’s luxurious amenities. The swimming pool and hot tub are just wonderful while the gymnasium and steam room ensure a completely satisfying holiday.

For those looking to work at the hotel, there is 28,000 sq. ft. of business & meeting rooms, including meeting rooms on the roof. The hotel’s Mediterranean restaurant makes business or leisure travel all the more exciting. 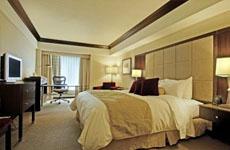 Situated in the heart of two-acres of beautiful green gardens on the roof of Place Bonaventure, the Hilton Hotel is a calm and peaceful place to relax in Montreal. In the centre of the city, the hotel is minutes from almost everything of interest in Montreal.

The hotel is surrounded by theatres, galleries, museums and the Underground City, perfect for all leisure travellers. For those travelling on business, there is the advantage of being placed in the middle of all the companies, offices and major business centres.

The Hilton Hotel has 415 rooms, all with marble bathrooms, work desks and video games. There is a wonderful outdoor heated pool on the roof while the waterfall and landscaped garden offers an excellent view of Montreal city.

The hotel has a world-class fitness centre to burn the calories gained at Castillon, a four-diamond rated French restaurant with a private terrace and majestic chandelier. There are three other fantastic restaurants on offer amongst the luxurious offerings at the Hilton Hotel. 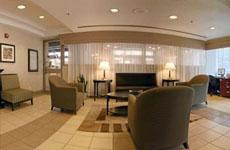 In the centre of downtown Montreal city, amidst all the offices, fancy restaurants and designer boutiques, the Quality Hotel finds a place to call it home. Just seconds from the city’s Museum of Fine Arts and Parc du Mont Royal, guests can find plenty of ways to relax and take in Montreal’s sights & sounds.

A seven-mile trip from the airport ensures quick transfers and a lot of time-saved, for business travellers, to add to the benefits of the hotel’s location. The Molson Centre is just down the road while the business district is all around the Quality Hotel.

There are 140 rooms at the hotel, each with large windows, writing desks and high-speed Internet. There is a restaurant called Werby’s, at the Quality Hotel, while coffee and newspapers are on the house. There are plenty of shopping and dining options around the hotel for guests to enjoy every minute of their stay in Montreal.