Built on the site of T’ho, the Mayan city known as “Ichcaanziho” or the “City of Five Hills”, Merida is one of the oldest and biggest cities in Mexico. Discovered by the Spanish, in 1592, the city owes a great deal to its Mayan-past as well as to the Spanish influence in various aspects of its life and culture.

From Spanish architecture using Mayan stones to the days of prosperity and Henequen, Merida is a city that has seen all possible ups and downs. A walled-city that was built to protect its inhabitants from revolts by the Mayans, Merida is a wonderful destination for those looking to grab an insight into these fantastic cultures.

Merida, at one time, had Henequen to thank for its large number of millionaires. The prosperity of those times is displayed in the architecture and design of the homes in Merida. Although, today, the situation is vastly different, these homes and mansions continue to stand, housing more than one family in each. Most of these homes have also been turned into offices and stores, a sign of the way things have turned in this wonderful city.

For guests, there isn’t anything much besides shopping, dining and a lot of sight-seeing. There are a massive number of museums and art galleries that house some fantastic displays, both from Merida’s past as well as from the modern world. Art, especially sculpting, is a very important part of this city and special sculptures are created and established along the Paseo de Montejo. The MACAY Museum has a new installation from Mexico and one other country, each year.

The first & second of November are special days in the Mayan calendar and the entire city comes out in celebration with elaborate altars built to commemorate their ancestors. The Jose Peon Contreras Theatre has a fantastic Classical, Jazz and Opera play-list especially when the Yucatan Symphony Orchestra plays at the theatre.

Its position on the trade wind belt gives Merida a tropical climate. The average highs, throughout the year, hang around the 330C mark, not going too far above or below it even in peak winters. The lows are also quite consistent in the year, hovering around 190C. From June to October, rainfall is quite heavy and although there aren’t many rainy days to speak of, throughout the year, the rainfall is quite strong. 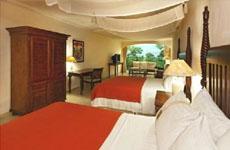 One of the most centrally located hotels in the city, the Holiday Inn in Merida is on El Paseo de Montejo, Merida’s biggest shopping district. Almost all the government and official buildings are right next to the hotel while shopping stores and restaurants are lined up along the street as well.

The hotel is conveniently close to almost all tourist attractions such as the Park Principal or the Palacio Municipal. The Holiday Inn is just three miles from the airport.

Every room, at the Holiday Inn, is equipped with modern amenities including large bathrooms, branded toiletries, high-speed Internet as well as climate control. There is a fitness centre at the hotel, along with a swimming pool.

The hotel also provides access to a golf course while the restaurant is a wonderful way to indulge in some local and international cuisines. 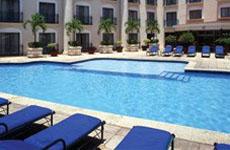 The Fiesta Americana Hotel is placed right on El Paseo de Montejo, a fantastic place to stay whether travellers are coming in for business or pleasure. The hotel is almost a neighbour to the Palacio Municipal as well as to the Convention Centre. Just about four miles from the international airport, the Fiesta Americana Hotel is ideal for everyone.

The hotel has many amenities including some tennis courts, a fully-fitted out gymnasium, a business centre, and even a shuttle-service to the airport & back. The hotel has a magnificent lounge and bar, while the spa and swimming pool are a fantastic way to relax. The Fiesta Americana Hotel’s restaurant is a great way to taste the local delicacies in a comfortable environment. 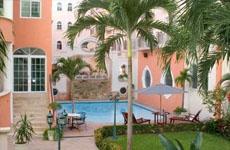 A block from El Paseo de Montejo, the Intercontinental Presidente Hotel is a few convenient minutes away from shops, restaurants and entertainment in Merida.

A short walk can take guests to the Park Principal while the Park Centenario as well as Casa de Montejo are within touching distance. The hotel is right next to the Lucas de Galvez Municipal Market, giving guests a taste of the local way of life in Merida.

The Intercontinental Presidente Hotel comes with comfortable rooms that have entertainment centres, climate control and a wonderful mini-bar. The restaurant, lounge and bar are ideal for a relaxing meal or drink after a long day, while the hotel’s business centre is capable of handling all the business needs as and when they come up.

There is a fitness room to burn off those calories while the Spa and beauty centre is the most wonderful way to cap off that nice holiday.