The capital of the Inca Empire, the Cusco city is one of the most beautiful and archaeologically significant pieces in the human history puzzle. Known as the historical capital of Peru, Cusco has a plethora of archaeological sites that have resulted in numerous awards such as the World Heritage Site as well as naming Machu Picchu as one of the New Seven Wonders of the World.

Cusco has just two seasons, each well-defined due to its subtropical highland climate. The April to October weather is generally dry with loads of sunshine and the occasional night-time freeze. July is the coldest month with temperatures averaging at around 90C.

For the rest of the year, it rains in Cusco, leading to low summer temperatures and a lot of frost & hail. Snow isn’t a part of the setting at Cusco, although rain is quite abundant.

Cusco city has some of the most incredible archaeological sites dating back to the 13th century AD. From the ruins of the Sacsayhuaman to more modern structures like the Cathedral of Santo Domingo, Cusco has it all. Machu Picchu is within touching distance with a wonderful Inca trail taking tourists up to those famous ruins on top of the Urubamba Valley.

Then there’s the Ollantaytambo, the fortress that was an expansion of the Sacsayhuaman. Cusco city is home to the Barrio de San Blas, a fantastic neighbourhood that is home & place of business to artisans and craftsman, and their workshops.

There are thousands of little alleys that throw the Cusco way of life into the open, while monuments like the Convent and Church of La Merced and the Cathedral of Santo Domingo show off the foreign influences on the city. There are plenty of places to pick up local Peruvian food as well as a number of eating joints with other types of cuisine. 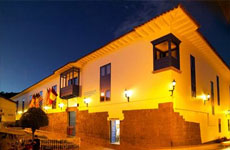 The Libertador Palacio del Inka Hotel is built inside a traditional Cuatro Bustos mansion that was built during the reign of the Spanish empire. Some parts of the hotel still have the original walls, such as the bar area.

The winner of numerous awards in the past, the Libertador Palacio del Inka Hotel has over 250 rooms and comes with a fantastic view of the Koricancha or Temple of the Sun.

The hotel is just minutes from the airport and has a wonderful little souvenir shop along with a brilliant view of the city. The Libertador Palacio del Inka Hotel also has a business centre and gymnasium for those who are interested. 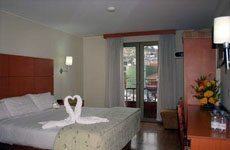 Placed right near the main square in Cusco, the Eco Inn is one of the best placed hotels for those interested in a bit of the local flavour. There are hundreds of tiny stores in the craft market, bang opposite the Eco Inn.

The hotel is also ten minutes from the edge of the city, making it the ideal place to stay for guests planning to visit the Sacsayhuaman Fortress, the Qenko or the Pukapukara.

There are over 165 rooms at the Eco Inn, all constructed with natural materials. The rooms have been designed to allow natural light to flow into the hotel, while every single aspect of the hotel is made from some part of nature. The hotel offers a fantastic restaurant and bar to go with the conference facilities for business travellers. 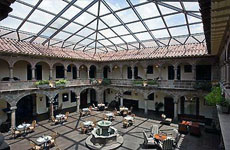 The hotel also boasts of wooden flooring and a magnificent restaurant that is the talk of the town. Local and international cuisine at its best, the Novotel Hotel creates a luxurious atmosphere for its guests in the centre of this historic city.