On the shores of the Atlantic Ocean, Casablanca city is Morocco’s largest port as well as city. While the political capital of Morocco lies in Rabat, Casablanca is considered Morocco’s capital for all other purposes – finance, commerce, tourism, culture and entertainment.

With almost all of Morocco’s largest industries and companies being based out of Casablanca, the city sees a lot of business tourists as compared to leisure travellers.

Placed in the Mediterranean region, Casablanca city has a typically Mediterranean climate. The maximum temperature, in summers, rarely goes above the mid-twenties while the lowest temperature, in winters, rarely goes below 120C. Rain is abundant in winters and for those not going on business, chances are that they will be extremely familiar with the hotel’s interiors than Casablanca itself.

Being a port city, Casablanca has been visited b y travellers from all across the globe. This has also led to different races settling down and, therefore, different influences governing the city’s culture and heritage. The New Town has a distinct French-touch to its architecture and appearance while the Old Medina has a massive Islamic influence on it.

There are plenty of mosques dotted around Casablanca city, like the Hassan II Mosque with the world’s tallest minaret (210m). Then there’s the Casablanca Cathedral, with its fantastic Mauresque architecture. When the tide is low, Casablanca throws up the Marabout de Sidi Abderrahmane, a small island off the coast that goes under-water during high tide. 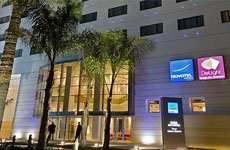 A four-star hotel near the port, the Novotel Hotel is right in the heart of Casablanca’s business district and is one of the most popular hotels for all business travellers.

The fact that the hotel is just a few minutes from the international airport also helps its popularity amongst them. The hotel is well connected by public transport, making it ideal for tourists to access other parts of the town. 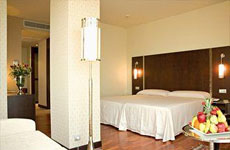 The Barcelo Hotel is bang in the middle of Casablanca’s commercial and financial district. The hotel is right next to Old Medina as well as Trade Fair as well as the Long Champ Racecourse.

Travelling to the business district isn’t a problem and neither is getting to attractions like the Craftwork Complex or the Hassan II Mosque. There are plenty of shops and restaurants serving local & designer items in and around the Barcelo Hotel, making it ideal for all kinds of travellers.

The hotel has five meeting rooms and a fantastic restaurant, bar & lounge to go with all the amenities in its beautifully decorated guest rooms. 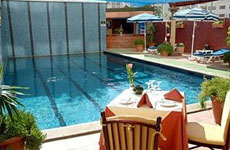 At the Idou Anfa Hotel, in Casablanca, there are wonderful things on offer, like the brilliant gourmet restaurant, a fantastic pool, a fully-equipped spa & sauna as well as a number of bars.

The rooms come with mini-bars, satellite television and all other modern amenities, but it’s the location that takes the cake. The Idou Anfa Hotel is right in the middle of Casablanca’s downtown district, putting it right next to all the commercial establishments.

The hotel is also close to the Hassan II Mosque as well as to the Old Medina town, making it ideal for business & leisure travellers at the same time. There are plenty of public transport options connecting the hotel to other parts of the town, adding to the convenience that is the Idou Anfa Hotel.