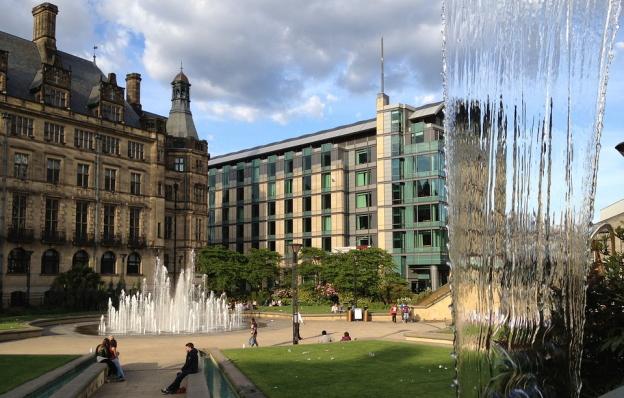 Through the years I’ve been to Sheffield a few times for work, attending seminars and visiting clients around the city but I never had the chance to explore Sheffield.

So when my Dutch girlfriend said that she had booked us a long weekend break back home, I had no idea that we would end up in the South Yorkshire and in Sheffield.

For a British expat coming back to the UK after living abroad for nearly ten years, was really a pleasure to see again the British country side.

We checked-in at Mercure Sheffield St Paul’s Hotel & Spa, a very modern hotel in the center of the city, our home for the next three days and we set off to make the most of our long weekend back in the UK.

Guests at the hotel can relax in the sauna and steam room at Spa Naturel, which also features an ice fountain. The fitness center has an indoor swimming pool and a fully equipped gym.

The gardens have some amazing water features which are well maintained and was a joy to watch the water cascade down them. This really is somewhere to bring the family on a hot summer’s day!!!

The Cathedral Church of St. Peter and St. Paul

Just five minutes’ walk down the Fargate street, took us to the Sheffield Cathedral. We loved this place, a mix of traditional and modern architecture fitted perfectly together in a light, airy and tranquil setting.

The stained glass in the modern chapel was breathtaking, we had a few photos and took some time to rest, reflect and even light candles for our loved ones.

Not to waste time we hailed a taxi for our next destination, the Kelham Island Muesum. I have to point out here that Sheffield taxis are very reasonably priced compared to the taxis in Amsterdam.

The museum is located in one of the city’s oldest industrial districts, and it is built on a man-made island over 900 years old. The Kelham Island Museum was opened in 1982 to house the objects, photos and archive material preserving Sheffield’s industrial heritage.

The interactive galleries of the museum present the story from light trades and skilled workmanship to mass steel production and what the life in Sheffield was during the Industrial Revolution. From the Victorian Era and the two world wars to the most recent steel making developments across the world.

On a recommendation by our friendly and very knowledgeable Sheffield taxi driver who came to pick us up from the museum we end up at the Millhouses Pub, where we enjoyed two huge portions of fish and chips with some very nice British ales.

After a very tasteful English breakfast at the hotel, we walked to the Sheffield Winter Garden which is next door to the Mercure Sheffield St Paul’s Hotel & Spa.

We were really impressed with the Sheffield Winter garden; I do not even know how we missed it the previous day as it is exactly next to the hotel. The actual “building” which is a huge glasshouse is one of the biggest temperate glasshouses to be built in the UK.

We were told that there are more than 2,500 plants from around the world in the garden creating a really beautiful atmosphere. The actual building itself is 70 metres long and 22 metres high (apparently large enough to house 5,000 domestic greenhouses!).

Together with Peace Gardens and the Millennium Galleries, the Winter Garden provide visitors with a unique experience in Sheffield city centre.

The Millennium Gallery is a great place to come and see the free exhibitions that are on display. On the day of our visit a Leonardo Da Vinci exhibition was taking place.

It was amazing to see that most of the Leonardo Da Vinci drawings had the royal seal on them, on the bottom right corner (compliments of Edward VII in the early 20th century). Visitors can see other exhibits as well, generally from the local area.

Our next stop the Botanical Gardens which are situated approximately a mile South West of Sheffield City center. We could have gone there by foot in 30-35 minutes but since we wanted to see as many attractions as possible, we called the Sheffield taxi company that we used the previous day to get us to the Botanical Gardens.

The Botanical Gardens date from 1833, another masterpiece from the Victorian times. They are classed as a grade 2 listed by English Heritage due to the preservation of most of the original design, and the concentration of historical listed buildings and structures on the site.

The Glass Pavilions are some of the earliest curvilinear glass structures ever built in the UK. The entrance to the Gardens is free through ought the year and they tend to attract plenty of visitors. The Rose Gardens and the Four Seasons gardens were very busy at times.

We also stop at the Curators House Tea Room & Restaurant, a small Café inside the gardens, had a couple of freshly baked scones and two turkey sandwiches with some coffee. The place was packed. Overall we spent 4 hours at the gardens and we wish we could have spent more time there but at 17:30 the gardens close to visitors.

Of course, we could not have left Sheffield without visiting the Meadowhall Shopping Centre.

I had personally been to Meadowhall before, but I knew my girlfriend would love it. She was pleasantly surprised by the experience. There is a lot to see and do, shopping wise there are shops inside that cater to all budgets, and plenty of choice for food too.

There is also a cinema inside the shopping center which is a great way to end the day if you would like to make a day out of your visit.

Unfortunately for us, we were flying back to Amsterdam in the evening and we had to leave Meadowhall by lunch time to head back to the hotel.

I don’t know why Sheffield is not actively promoted as one of the top destinations for visitors to the UK from continental Europe. Location wise Sheffield can be reached easily from most of the UK airports at very reasonable times.

Public transport in Sheffield is provided by trams and buses. The tramway system, is known in the city as the Sheffield Supertram, which is operated by Stagecoach Sheffield. Most of the attractions in Sheffield, hotels and parks, can be easily reached by public transport.

Airport transfers to Sheffield from the main regional airports are also at a very reasonable rates. The Sheffield taxi drivers are very knowledgeable too. Like having a private tour guide with you.

I will highly recommend you put Sheffield on your travel bucket list. For a long weekend or even a full week, Sheffield would happily exceed your expectations. There are so many things to do and see in the city.

The Industrial Revolution has enriched this former medieval town with Georgian and Victorian buildings that have been well-maintained and re purposed to serve well the modern and vibrant city of Sheffield.