Every year millions of airline passengers are booking their flights online, by doing so they are saving a considerable amount of money. There are a lot of promotional fairs and discounts from the airlines to try to attract more passengers and increase their profitability. It is a numbers game, as they industry experts are saying.

However, recently a website called Skiplagged.com have started pointing out to the public what most of the savvy airline passengers already knew. The “Hidden City Hub” ticket. 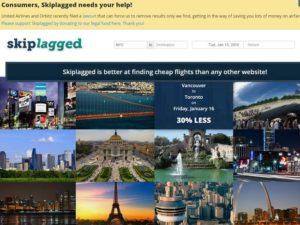 This is how it works, in its simplest form, a passenger buys a ticket from city A to city B to city C but does not travel beyond city B,” according to the companies’ complaint. “’Hidden City’ ticketing is strictly prohibited by most commercial airlines because of logistical and public-safety concerns.”

Skiplagged.com helps travelers find cheap airfares by enabling them to book multistop flights and disembark before the flights reach their as-booked final destination. Sometimes a fare that travels through a hub city to another location can be cheaper than a ticket to the hub city alone.

The companies said in their complaint that Skiplagged.com founder Aktarer Zaman of New York “intentionally and maliciously” interfered with airline industry business relationships “by promoting prohibited forms of travel. This is what the United Airlines Inc. (UAL) and Orbitz Worldwide LLC are claiming but does this make sense for the consumer?

The same principle has been applied by Skiplagged.com We need to remember here that Skiplagged.com does not actually interfere with the airlines pricing model or make any money out of it.

It just shows to the airlines passengers how to save money on their flights by pointing out what the airlines does not want the consumer to know. Many times it is cheaper to book a flight from A to B to C and on your connection at airport B, just sit back enjoy a cup of coffee or a beer and let your plane go. What is wrong with it?

So Skiplagged.com is fighting back, they have started a fundraiser at Gofundme.com 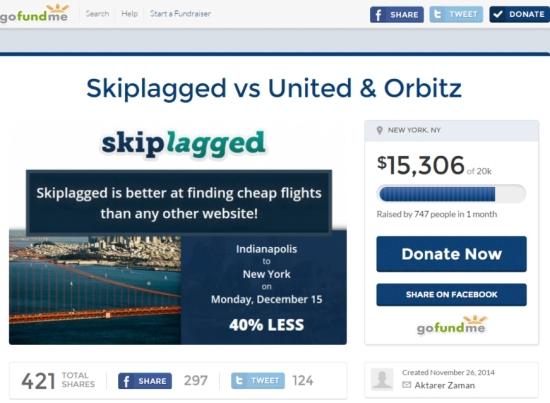 Within hours of the fundraiser going live 747 supporters have already raised $15,306. The fundraiser has a healthy momentum as a lot of people are line up with Skiplagged.com. There is nothing wrong here except corporate greed by United Airlines and Orbitz Worldwide.

The message from Skiplagged.com was as follows:

Skiplagged’s sole purpose has always been to help you become savvy travelers. We have been doing that by exposing pricing inefficiencies for air travel, among other things. Unfortunately, we have been doing too good of a job so United Airlines and Orbitz recently teamed up with a lawsuit to get in the way. Everything Skiplagged has done and continues to do is legal, but the only way to effectively prove this is with lawyers. Please show your support for Skiplagged by donating towards this campaign to help fund our legal team.

On a later update a few hours ago at Gofundme.com Aktarer Zaman said:

“Wow, Skiplagged is getting a lot of attention. Thank you so much guys. If you noticed, I increased the target for this campaign a bit. That’s because I really don’t know how much this lawsuit is going to ultimately cost, other than probably a lot. However, you have my word that how every cent is spent will be posted here. If there are any remaining funds, those will be completely donated to charity. I haven’t decided which yet, but if you have any suggestions, do send me a message.”

It is clear that another David vs. Goliath battle is brewing up.

Hotels-Fairy.com is supporting Skiplagged.com on this battle. We will keep you up to date with regular updates on our blog and on our Facebook page here.