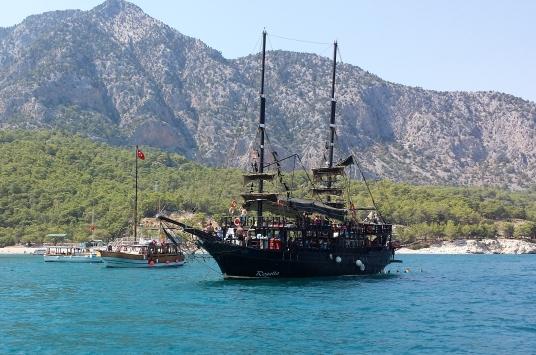 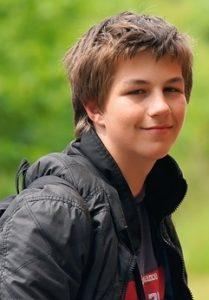 With the university exams out of the way, we gathered at the pub debating where to go for our summer holidays.

There were four of us, Mat, George, Kevin, and myself Andrew.

The choices were mainly Spain, Italy, Greece, but with our student budget been on the low side we had to eliminate most of the ideas.

Even if we could get a low cost airline like Easyjet to fly us to Spain we couldn’t collect enough money among us to book a cheap hotel room for four lads in Spain.

Disaster was looming on the horizon, we could all see ourselves spending the summer at home with a trip down to Southampton for a long weekend.

That was all until Murat, the fifth member of our university gang pop in to our table holding a travel map to Antalya in Turkey.

Murat was born in Luton but his parents came from Turkey in the early eighties. His parents still have contacts with their extended family back in Turkey and Murat had been toying with the idea of going to Antalya to see where his parents grew up.

Needless to say the connection was instant!! Murat’s family had a house in Antalya. After a few more rounds at the pub our travel plan was set, hands were shaken, we were good to go. Our first lads holiday to Antalya in Turkey. 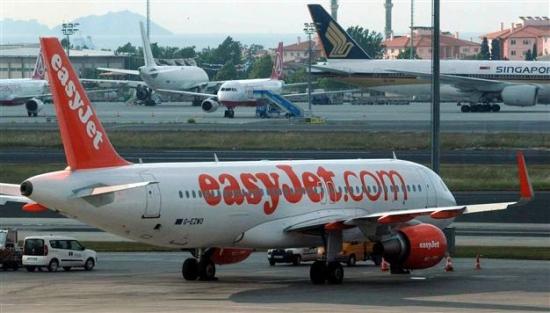 We flown from Gatwick with Easyjet and we landed at Antalya airport just before 10:00 a night. We were picked up by Bulent, Murat’s cousin who took us to our accommodation and promise to show us around the next morning.

Antalya city is definitely a modern city built on the South Western coast of Turkey with a population of around one million with a lot of buzz and night life for the holiday makers. 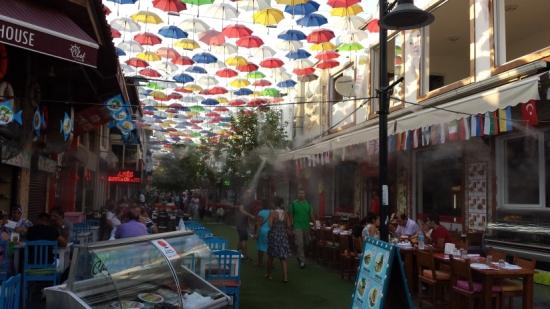 In the morning we took the tram upto the Hadrian’s Gate or Üçkapılar in Turkish and we walked into the old part of the city the Kaleici for some sight seen.

Antalya was buzzing, many touristic shops selling souvenirs, beach clothes and café/restaurants are cramped in the rather small space of the old city with narrow streets and paths that somehow all seem to lead downhill towards the old harbor. 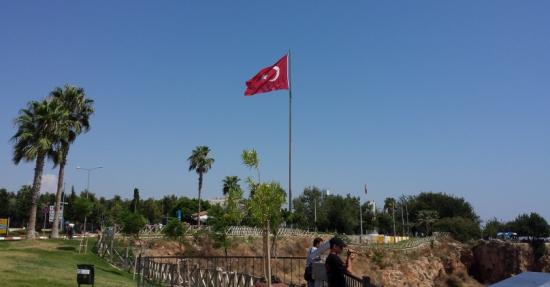 The next morning we walked back to Hadrian’s Gate and took the tram to Konyaallti beach.

Konyaalti beach is on the western side of Antalya city and it is about 7 km long. At the far end of the beach you can clearly see the Beydagları mountains. Inwards from the beach there is a huge green park with plenty of cafes, bars, nightclubs and hotels.

If you fancy doing more than just swimming and sunbathing on the Konyaalti beach, a short walk towards the park and across the Dumlupınar road are the Aqualand waterpark and the Antalya Aquarium, one of the biggest aquariums in Turkey, it claims to have the longest tunnel aquarium in the world, 131 meters long!!

We really liked the beautiful designed thematic exhibitions of different seas, oceans and rivers. There are many different types of sea species small and big as well as sharks. The sharks are not huge but there are really many of them and you can see the divers swimming among the sharks while feeding them. 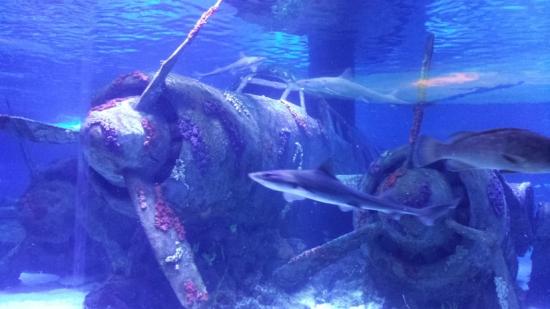 All signs at the Antalya Aquarium are written in 3 languages: Turkey, English and Russian. It cost us 75 Turkish Lira per person for entrance to the aquarium. On the ground floor as you exit the aquarium there is food court with a number of different establishments to choose. By that time we were starving so we marched to McDonald’s which these days seems to be everywhere.

Lara beach was our second favorite beach in Antalya. You can drive to the beach or get there by taxi but since we were on a budget, Bulent advised us to take a small minibus from the centre. In Turkey they call them Dolmush and they seem to be everywhere and run very frequent services across the city.

However, sometimes they can get very crowded. To the Lara beach you need Dolmush number 18, 30 and 77, it took us around 40 minutes to the beach and it only cost us 2,5 Turkish Lira each, which is around a dollar each. 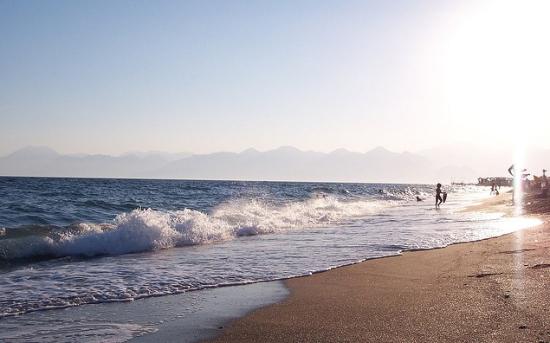 Lara beach was not as busy as Konyaalti beach, which was a surprise as it is the longest sandy beach in Turkey and offers stunning views of the Mediterranean sea. We had a long walk and it seems some spot on the beach tend to be more popular than other with private organized beach clubs.

With the temperature on the beach approaching 40C we decided to rent a couple of umbrellas and sunbeds. There are plenty of bars with cold beers, to keep you cool and refreshed and since we were in Turkey Efes beer was our first choice!!

Side is a holiday resort around an hour from Antalya city, full of 5 star hotels. It also seems to be very popular with Russian tourists. Side has calm water and fine sandy beaches, plenty of water-sport activities and is dominated by all inclusive type of hotels.

During our stay in Antalya we also hopped into a pirate boat and went for a daily cruise. There are many boats leaving around 10 in the morning from the old harbor.

Don’t get intimidated by the Turkish sales men who claim to have a last minute special fare, walk around and compare the different cruises before you make up your mind. Then you are ready to start bargaining, believe me bargaining is part of the Turkish culture.

Fares vary according to the length of the trip, we went for the six hours cruise.

Once on board we snap some photos and had a few rounds of beers, loud party music was echoed around the boat reflecting the mood of our group. After almost an hour of sail we stopped twice for swimming and snorkeling in some truly amazing bays.

Complimentary food was also provided by the crew of the boat. We were served spaghetti, green salad and fish barbequed which was delicious and after a tasty lunch, there was even more time to relax as we sailed slowly back towards the harbor.

The night life in Antalya did not disappoint us. Having a local on our side we were taken to all the best pubs, bars and night clubs. Kaleici at night was heaving with young Turks and tourists, the narrowed streets where full of folk-songs bars and little colorful taverns. The Turks seem to party until the morning, so we joined them too!

Ally’s night club was our favorite night club, great music, amazing sea view, and plenty of girls to dance and flirt until the sun comes out. OK drinks were a little bit expensive but we were lucky to be amongst a group of friends of Bulent so we were charge local prices, no tourist prices. I could write more here but as they say, what happens in Vegas stays in Vegas!! 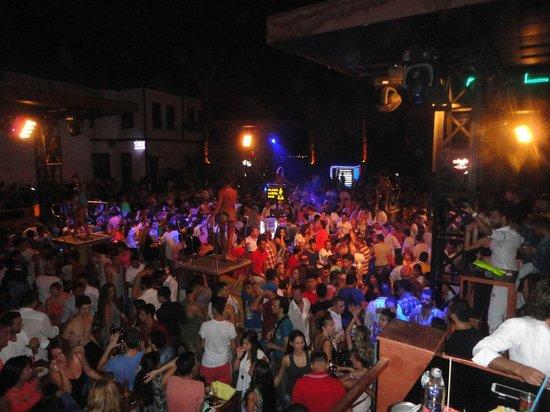 I have to admit that towards the beginning of the second week of our holiday to Antalya we were all running low on cash, our student budget could not support our all night partying lifestyle, so we started spending more time at the beach than going clubbing and partying every single night.

Without doubt this was our best holiday so far, we had great time, we made a lot of friends and we all agreed that we would definitely be going back to Antalya in the future.

I am actually thinking after my graduation to apply for a job in Antalya, Turkey. There are many hotels in Antalya that require English speaking staff, for various roles during the summer.

Andrew Wain, the author of the lads holiday to Antalya in Turkey is a final year student of hospitality and hotel management at LMU.