Posted on in: Travel Planning|Jump To Comments

The national day of independence, as you know, celebrates the United States independence from the British Empire and although this is a yearly celebration for Americans, if you are travelling to America and happen to find yourself there on the fourth of July, you will want too get the very best experience possible.

That is what it was like for me anyway, and there were a few options to choose between. The fireworks from Cocoa Beach pier are held over both days of the weekend closest to the Fourth of July, so you can go and enjoy a day at the beach then watch the fireworks in the evening, and spectacular they are shooting out over the North Atlantic, perfect conditions make for a perfect evening.

July the 4th though is a national holiday and the celebrations are continued elsewhere, you may consider the theme parks to have some form of show going on for the celebration, and whilst the City Walk strip has many different bars, clubs and restaurants, the fireworks, I had been reliably informed were short lived and an anti-climax.

When you contrast this with Disneyworld’s fireworks extravaganza, it was a poor showing for Universal Studios and one they will have to out do next year if they really want to show they can compete with the powerhouse of Disney on days like these.

The town in which I happened to find myself in came about by recommendation from a taxi driver who suggested we make our way to the small town of Celebration located just 10 minute drive from Disney Hollywood studios.

This community is part owned by Disney, which pays for the town to be as picturesque as possible with the homes being kept in pristine condition, built in 1995 and sold through a lottery because of the high demand this small town started with 350 homes but continual development has finished and tripled the amount of homes in the area. 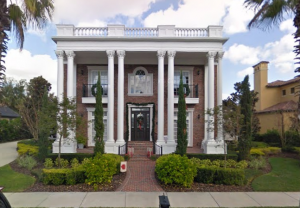 The Downtown area of Celebration is where the main activity was with a bandstand at the bottom of the high street, (pictured below) with the lake setting behind the music, the main gathering of people were around this street with street food, entertainment and a bar set up. 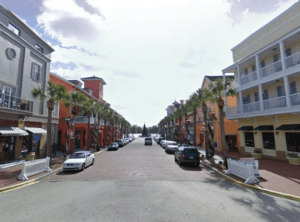 After the sun went down, and the bands had played there was the most spectacular fireworks display I had ever seen, launched to the music and exploding to the beat these fireworks were expertly planned and executed.

Heart shaped fireworks interlinking to the music and spectacular fireworks launched to Queen, it was one of the greatest fireworks displays I have witnessed from a town that had a lasting impact on this humble blogger.