How to Bring London to a Standstill 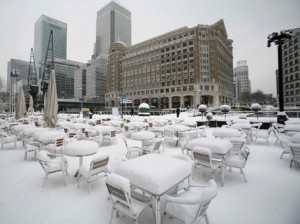 Anyone who has visited or lived in London will know exactly what is meant by the phrase “London never sleeps”.

London is a 24/7 city. As well as the spectacular nightlife, which would expect to see in any capital city, you will also find many high street shops, restaurants, supermarkets and even hairdresser’s open right throughout the night.

It would take something phenomenal to slow down a city that seems to never sleep, let alone bring it to a standstill, yet it has been done many times in the past and will certainly happen again in the future.

Let’s take a look at some of the events that have brought this great capital to a complete standstill.

Public Sector Cuts Protests
Saturday 26th March 2011 – Half a million protesters took part in a demonstration march against the government’s imposed public sector cuts. The march caused utter chaos through the West End and brought movement in that area of London to a standstill. It was the biggest of its kind since the Anti-Iraq war protests back in 2003.

Due to activists taking matters into their own hands, a peaceful demonstration turned ugly and resulted in hundreds of thousands of pounds worth of damage — caused by those who felt the need to take their anger out on other people’s and government property.

Similar events are likely to bring London to a standstill again in the future.

Snow Chaos
Winter 2008/2009 brought with it more snow and ice than Britain had seen in years. At its best, the snow was a minor inconvenience and offered children an excuse for a day off school and a snowball fight. At its worst, the snow resulted in the cancellation of almost every bus in London, the suspension of service on over half the Tube lines, all flights being cancelled at Heathrow, most flights being cancelled at Gatwick and the total closure of London City airport.

People couldn’t get to work, go on holiday or even go about their day-to-day business without risking life and limb on the ice-coated roads, costing the UK economy an estimated £1.2 billion a day.

London Underground Tube Strikes
Anyone who has to get from A to B in London will tell you that the quickest and easiest way to get around the capital is by using the super-fast underground trains. Sadly this is also by far the most stressful way to travel, with hundreds of thousands of people passing through the Underground every single day.

The recent Tube strikes prevented a huge percentage of people from getting on with their normal lives, stopped vital infrastructure from running across the city and cost the economy millions in lost revenue.

Let’s hope that negative events remain few and far between and London is brought to a standstill for more positive events in future.

The wedding of Prince William and Catherine Middleton
On Friday 29th April 2011 Prince William Arthur Philip Louis, Duke of Cambridge married Catherine Elizabeth Middleton, daughter of a distinctly middle-class family of former flight attendants. The fairy-tale match of a normal girl and the future King of England captured the hearts and imaginations of the world, resulting in a million people taking to the streets of London for the big day.

The avalanche of humanity that descended on the capital to enjoy the nuptials resulted in full-to-capacity hotels across London, private homes being rented out to tourists and the predicable travel chaos. Fortunately, the patriotism inspired by Wills and Kate’s first official kiss on the balcony of Buckingham Palace ensured that spirits remained high despite the gridlock.

Filming Harry Potter in Piccadilly
In April 2009, Daniel Radcliffe, Emma Watson and Rupert Grint filmed scenes for the Harry Potter and the Deathly Hallows part one in London’s Piccadilly. They were joined by a cast of 400 extras and a massive film crew. As world-wide stars filming one of the most anticipated films of recent years, they drew a staggering amount of attention and kept Piccadilly at a standstill until 5am.

Rugby World Cup Winners 2003
When England won the rugby world cup in 2003 their celebrations on the way to Buckingham Palace to meet the queen were joined by three quarters of a million fans, who turned the capital into a sea of white and red and brought London to a standstill. It was a mind-blowing celebration which was well-earned by our sporting heroes.

The London Smog Disaster
On December 1952 there were several weeks of unusually cold weather which resulted in households burning a lot more coal than usual to keep warm.

The extra coal emissions from millions of homes, accompanied by an increase in sulphur and smoke emissions from local industry created a ‘pea souper’ to remember. Air, rail and road transport were unable to operate due to the severe impaired visibility and ultimately London came to a standstill.

Gin Riots
Everyone with even a shred of taste likes a good gin, but in London in the 18th Century gin wasn’t just popular, it was a full-blown craze. The craze started because the only readily available alcoholic drink in England was was beer.

Brandy and wine were almost exclusively imported from France and since war with France was a relatively common British pastime up until relatively recently, they were often totally unavailable. To offer the British public an alternative to beer or expensive imported spirits, King William III introduced lovely delicious gin in around 1669.

Being easy to make and far nicer than brandy, gin was soon available all over London at prices that anyone could easily afford. By 1725 London had over 6000 gin houses and innumerable wandering gin vendors and stalls. The grim reality of live in the 18th Century coupled with incredibly cheap gin resulted in most of the working class population spending the vast majority of their time absolutely sozzled.

Miscarriage rates went up, the capital’s population fell as the common men and women drunk themselves to death and companies went under because all their staff stopped turning up to work so they could drink gin all day instead. Seeing the problem, the British Crown passed Gin Acts in 1729, ’33, ’36, ’37, ’38, ’43, ’47 and ’51.

Between 1700 and 1751, the Gin Acts forced tax up in gin by 1200% and riots broke out as people protested the loss of their precious cheap booze. A few bad harvests lowered the public’s disposable income and by 1757 the gin craze had faded, but not before the riots had claimed several lives and a great deal of damage.

This post was provided on behalf of ShowandStay.co.uk – provider of theatre shows and London holiday breaks.