What not to do in a hire car……

This week I was going to look into the weirdest spiritual retreats, but then on Sunday all that changed.

There are moments in our lives when we are young, full of energy, and wanting to get out there and discover the world that we perhaps take things just that little bit too far, and on Sunday afternoon we encountered two such people.  They only looked about 12, and it was pretty obvious that they had ‘borrowed’ their parents hire car, obvious because of the fluorescent jacket on the parcel shelf and the ‘diesel’ sticker on the petrol flap.

They wanted to discover the delights of nature, or something along those lines anyway!  Now, on Sunday afternoons, public holidays and during the summer we have our fair share of tourists looking for the lake.  The fact that they’ve had to already drive past it to get to us is irrelevant, they want somewhere off the beaten track, and if they get to us they’re almost there.

After politely advising them that there is no way a Fiat Panda will go down the steep gravel track they turned around, narrowly missing the scaffolding which was protruding into the road, and off they went. 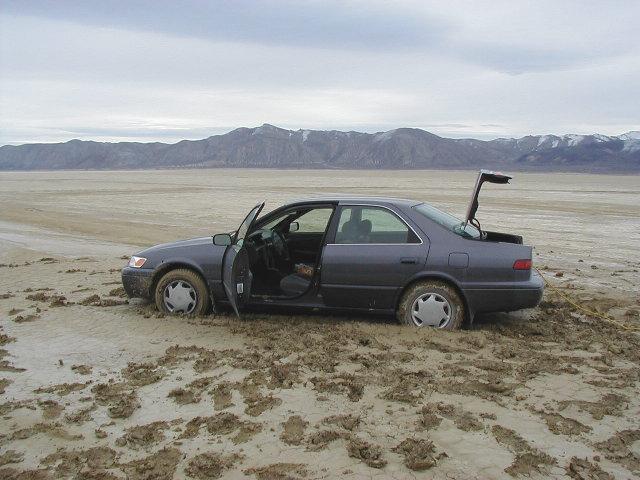 Back up on the scaffolding painting the outside of the house I notice the very same car attempting to descend an equally steep bank on the other side of the ravine.  Now if there any fans of the film ‘Clockwise’ with John Cleese out there, you’ll remember the scene when John Cleese drives over the fields in a clapped out Morris 1100 on a short cut to Norwich, this was that very same scene.

Out he gets, bit of shouting, she gets out, he gets back in.  Car starts again, the engine revs and she tries to push, but there’s not much of a chance on a 1:3 gravel slope.  Lots more shouting, doors slamming and then it sinks in that there’s no way they’re going to get out of there without help so they start walking.

Half an hour later we’ve not seen them, but then….in the distance blue lights, flashing blue lights, they’d called the fire service!  The boys arrived in a Land Rover to pull then off, hooray they’re saved…..not quite, the land rover gets stuck too!  Wheel spin, lots of revving, but with the help of some large rocks they get off, and away they go leaving the Fiat Panda still stranded.

Another cup of coffee and it’ll be dark soon, but just when we thought we’d have to go in, a man on a tractor arrives and saves the day…

Bless them; we all learn the hard way, they’d been stuck for over two hours, and wouldn’t they be in trouble when they got back.  I wonder how they explained the four bald tyres and the burning smell coming from under the bonnet to the car hire company when they handed the keys back in?