Most Dangerous Cities for Pedestrians 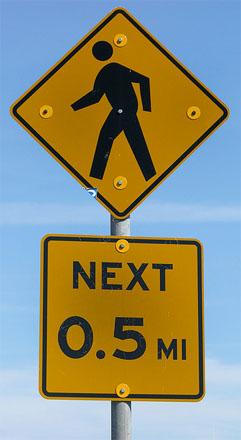 Most people think that walking is safer than driving. However, if you live in Florida, this is not necessarily true; a new report released in 2011 by Transportation for America found that the top four most dangerous places to be a pedestrian in the United States are in Florida.

The top four most dangerous places to walk in the United States are the Orlando-Kissimmee metro area, Tampa-St. Petersburg-Clearwater metro area, Jacksonville and Miami-Fort Lauderdale-Pompano Beach metro area, all of which are located in Florida.

In addition to these statistics, the report also noted that the death rate per 100,000 pedestrians is 1.6 percent in the United States. Compared to similar wide-open countries such as Canada and Australia, which respectively have rates of 1.1 and .9, the United States’ rate is very high.

The report speculates that the reason for this is because many cities in the United States, especially in the South, have not made the infrastructure improvements that would improve pedestrian safety in the streets. The most dangerous type of street is one that has multiple lanes of high-speed traffic and plenty of entrances to parking lots and drive-throughs but lacks enough sidewalks and crosswalks.

According to the Insurance Institute for Highway Safety (IIHS) and the Highway Loss Data Institute, a good 12 percent of all motor-related deaths each year involve pedestrians. Male pedestrians are more likely to be involved in a motor-related incident.

If you’d like to avoid becoming a part of the PDI, make sure to always actually look both ways before crossing the street; it’s not just something little kids should do. Always use sidewalks if possible, and if you are forced to walk in the road, walk facing oncoming traffic.

When walking at night, try to stick to lighter colors so drivers can see you better. Try not to cross the street at a curve as drivers may not be able to see you.

Bio: Bill Hunter the author of the “Most dangerous cities for pedestrians” is a writer for a Canadian travel company. They help Canadians find affordable holidays in the country and abroad.