If you want to try something different from the run of the mill hotel in the city, why not try the latest in alternative accommodations, a floating hotel.  Don’t worry if you get seasick, some of these floating hotels don’t even move with the tide.

This has got to be the most beautiful and romantic floating palace in the world, right in the middle of Lake Pichola in Rajasthan. Built from white marble which glistens in the moonlight, it’s like visiting another world, the food is incredible, and the rooms are opulent.

This hotel is a truly incredible place to stay, and all its guests are treated like royalty. 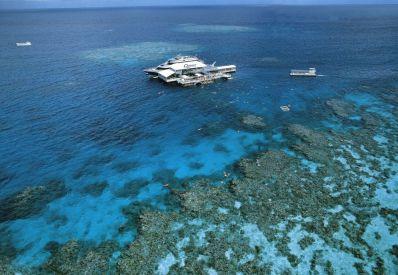 This hotel is definitely one that floats, and it’s a great way to visit the Great Barrier Reef, (it’s not like one of those submersibles or glass bottomed boats either!)

The hotel visits a different site each day for diving, snorkelling or simply relaxing on the sun deck.

Just like a land based hotel there is excellent cuisine, a bar and luxurious suites, but coming soon is…Reef World, the first floating hotel off the Great Barrier Reef with underwater viewing gallery and reef sleep underwater cabins.

Other features are a swim up bar and barbeque area, all powered by renewable means!

When the QE2 was sent to Dubai to become a luxury-floating hotel off the coast of Palm Island, Dubai’s shipbuilders built the world’s largest yacht which is to be anchored on the River Thames.

In 2012 the yacht is to become the Aquiva Floating Hotel, and it’s due to open just in time for the Olympic Games.  The ship is inspired by the sail shaped Burj Dubai hotel, but unlike other ships it will have no engine, another difference is that the captain’s bridge will be the location for a presidential suite rather than a ships wheel.

Winner of the Design Observer award in 2008, the ‘Manned Cloud’ as its known is the very latest in a very different kind of floating hotel.

Shaped like a whale, the hotel was designed in conjunction with the French aerospace body ONERA along with Massaud Studio.  The two deck cabin will have a restaurant, gym, bar, and a sun bath on the sun deck.

It will be able to do a non stop round the world trip in just three days, and to put your mind at rest, it’s not like the explosive hydrogen balloons which never really ‘got off the ground’.

This one is filled with helium so if your fellow passengers are a bit boring you could always do the old party trick of breathing in helium and doing funny voices!

Do you know of other amazing floating hotels?  We’d love to know about, so please do post your suggestions in the comments below.