5 Most Dangerous Places To Visit

Posted on in: share your stories, Travel Tips, Travel Trivia|Jump To Comments 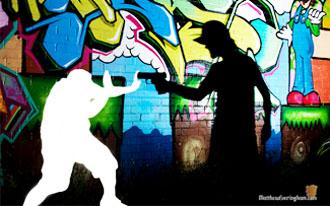 It’s a sad topic really and one that’s not often written about in blogs because it can seem too politically incorrect to do so, but there comes a time when you have to take common sense over politically correct niceties – if for no other reason than to stay alive.

There are dozens of countries around the world which are torn apart by systemic and unchecked violent crime, and generally this is due to apathetic failure on the part of their governments.

The locals vote again and again for politicians who vow to clean up the crime and protect the terrorized citizens, only to fail them over and over the second they’ve gained power. With no heroic politicians who will keep their word anywhere in sight, there seems little hope left for these nations.

The next time you plan a holiday take these entries under advisement and if you go there, show some common sense regarding wondering around alone at night.

Although tourists are not particularly targeted, citizens living in the poorer areas are tormented by violent crime. The USA has perhaps more guns than any other country, and criminals are more than happy to make full use of them to take what they want.

With around 50 murders taking place every day, the stats do not lie. Americans also constitute the greatest number of criminals spending time in overseas jails, adding to the country’s image of a war like nation.

The US government has implement oppressive measures such as the Patriot Act, tortured prisoners and held people without trial in recent times, all under the guise of defending against terror attacks.

Perhaps the saddest and most maddening story in this vein, South Africa is the most developed nation on the African continent. Considering the rich natural resources the country has, at the conclusion of Apartheid this country could have been a major power.

Rather than this, the ruling party, after the retirement of Nelson Mandela, set to squabbling with each other. Now a chain of appalling corruption, back stabbing, sickening greed and apathy for the people have led to widespread slaughter.

The continent has never been peaceful and it seems sad to say that it appears unlikely that it will become so in the foreseeable future.  It is perhaps more difficult to note African leaders who have been good for their people.

Most of their leaders took over by force, going from terrorists to government officials, but having won under the pretext of fighting for freedom from oppression – they simply decimate the population and plunder everything they can find. Such leaders include the genocidal Mengistu Haile Mariam, the tyrannical Al Bashir and the villainous Robert Mugabe.

A nation at war is a foolish place to visit, plain and simple. In this case every country seems to want a piece of Iraq due to its strategic location and oil access, but politically and religiously motivated groups are perhaps even worse. Since 2003, the United States has occupied Iraq which has led to the deaths of over 650 000 civilians.

Land mines, suicide bombers and the thunder of rifles split the silence so often that the overall catastrophe is virtually immeasurable.

Simply do not go here. At least in the other entries the threat is overt but here an insidious social poison spreads through the country, threatening everyone and leaving no one safe. From government officials to tourists, no one is safe from kidnappings, assassinations and flat out murder.

Colombia supplies 75 percent of the world’s cocaine thanks to the late Pablo Escobar and the Cali Cartel which has waged (and pretty much won) a military campaign against the government. No legal entity has the power in this land which serves as a horrifying example of what happens when no one comes to help a peaceful government in desperate need.

Warren Kings the author of the “5 most dangerous places to visit” is an international relocation expert and qualified journalist who eventually had to relocate to UK after marrying his beautiful wife. Today he enjoys his career as an online content writer.