Astana: The jewel of Central Asia 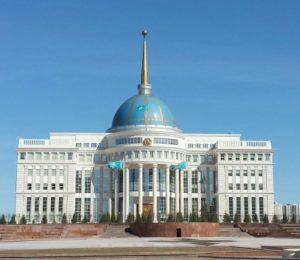 The Presidential palace in Astana

The jewel of Central Asia

A few months ago with a fellow traveler we decided to visit Kazakhstan on our Asia tour and we landed to Astana the capital of the Republic of Kazakhstan as it is officially called.

Having travel through most of Asia we had our minds set to what we were expected to find in our trip, oh boy we were wrong!! A week full of surprises.

Astana is something else, something unique. A city from the future, full of strangely futuristic structures, buildings and landmarks. An architectural paradise.

Where shall I start? 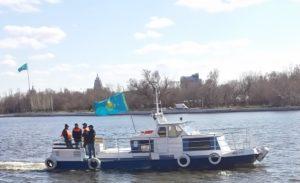 Astana city is build around the Ishim River who divides the center of the city in the two parts, the right one which is at the northern bank of the Ishim river where the old town is, and the left one which is at the southern bank of the river, where the new city has been constructed full of government buildings and many luxurious apartments, hotels and living complexes.

Going away from the futuristic design of the city, the people of Astana seem to be very friendly and approachable, whenever we had to stop and ask for directions and advise.

Obviously it helped that my travel companion was fluent in Russian, it made our travel much easier.

Astana has a very strong economy which can be seen everywhere around the city as oil and gas money have transform the city with a massive boom in construction. 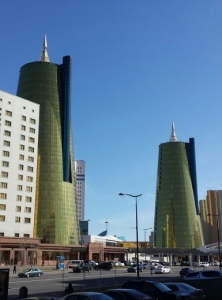 The residences of Astana enjoy very high standards of living, with disposable income where can only be seen in developed countries in Europe or the US.

Most of the credit for this rapid development and growth in Astana goes to the president of the Kazakhstan Mr. Nursultan Nazarbayev who has been running the country for the last 24 years, since the independence from the Soviet Union.

His ingenuity, determination and vision have managed to make Astana the city as it is today literally.

In 1997 in one highly criticized bold move, he decided to move the nation’s capital from Almaty, the country’s largest city, to Akmola, a small unknown town deep in the Kazakh steppe, and renamed it Astana, which means “capital” in the Kazakh language.

Who could have imaging or even believe at the time that this little and unknown city in less than 15 years will be transformed into the jewel of Central Asia.

According to the Kazakh government the average disposable income in the country cames to $124.000. Not bad for a country that did not exist 25 years ago. 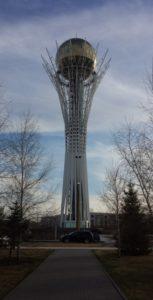 In 2012 Astana was chosen by the International Exhibitions Bureau, as the venue to host the EXPO-2017 which is going to be focus on Future Energy.

The food in Astana is much closer to the Asian cuisine than the architecture of the city. We had a choice of Asian, European and even American cuisine but as always we dipped in to the local cuisine.

We really liked the Shashliq, at “Real Restaurant” on 68 Abay Dañgili street, a classic kebab of either pork or chicken served with freshly chopped onions on the side.

Boursaky, a very tasted bread served hot, Beshbarmak was also came up highly recommended by the locals but we decided to pass on it as it is a horse meat dish cooked with pasta.

There are many hotels in Astana from, two star to five star hotels, with the cheapest once to be around the $50 mark and the most expensive once to go for a few thousand dollars a night.

You can book hotels in Astana with Hotels-Fairy.com, just click the link above.

We had an amazing time in Astana and we highly recommend it to fellow travels who wish to see today the jewel of Central Asia, a city from the future.